Measuring radioactivity from radon is potentially very confusing for the lay person for several reasons. One of which is that there are several different units of measurement depending on the application, era of standards and preference based on world regionalisms. Applications include activity, (which radon measurement falls under) absorbed dose, which is the measure of radioactive energy absorbed by tissue per unit mass and dose equivalent which is the measure of absorbed doses from DIFFERENT types of radioactivity such as alpha, beta, and gamma radiation. Many scintillation meters still measure this in the older measurement unit rem (Roentgen Equivalent Man) or microrems for gamma radiation.

For instance, when measuring radon, North America prefers to use the picoCuries per liter (pCi/L) designation as opposed to Becquerels  or Bq / meter^3 which is typically used in Europe and the UK. These both measure a specific number of atomic disintegrations per volume of space.

Just as a quick conversion from the picoCurie/liter to the Becquerel / m^3: 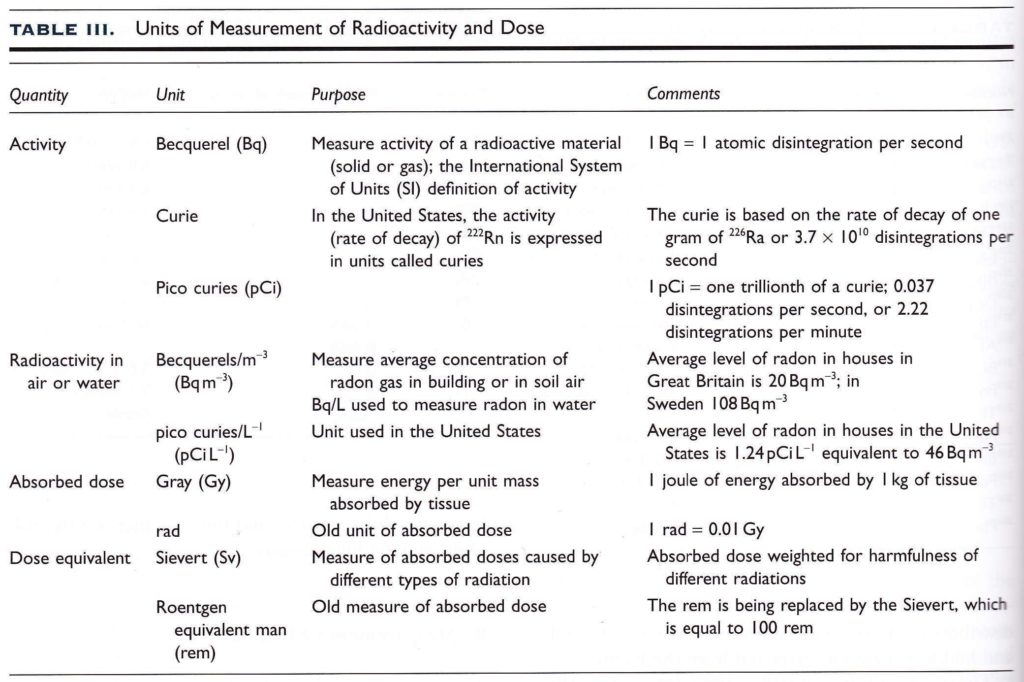 Units of Measurement for Radioactivity and Dose

As an added note, a little known unit of radon is what is known as a Working Level (WL) which is the quantity of radon that will produce 1.3 X 10^5 MeV (Mega Electron Volts) of potential alpha particle energy per liter of air. A single WL of radon is equal to the RDP’s (Radon Decay Products) in equilibrium with 100 pCi/L of radon. Because the equilibrium value for RDP’s for indoor environments is typically 0.5, radon concentrations of 1 WL would be around 200 pCi/L.

Below is a detailed chart showing the radioactivity pathway to radon from the original U-238 atom. Also shown are the different types of radiation:

Alpha Radiation – (from Radon-222 as an example) high energy helium nuclei (almost no penetrating power, but does a great deal of damage at close range to cells and DNA – will not penetrate outer layer of skin, but can cause direct harm to epithelial cells in the lungs if inhaled) It causes approximately 5 X the damage of gamma Radiation or X-Rays.

Penetration and of Alpha, Beta and Gamma Radiation

If you follow the diagram below, the radioactive decay of Radon-222 to Lead-210 results in the emission of 3 alpha particles, 2 beta particles and a discrete amount of gamma radiation. (the nature of which is an electromagnetic wave, not a particle) Because radon decay products (RDPs) are electrically charged particles, they readily adhere to suspended dust particles (which can be inhaled) or other surfaces in a phenomena known as “plate-out”. Either pure RDPs or the particles they are attached to can be inhaled.