There are a variety of ways to monitor the radon levels in a residence, home or commercial building and the best detector for your needs depends on balancing cost, accuracy, ease of use and type of application such as a long or short term test.

The chart below gives a comparison of different detectors including the time period duration during which radon is measured. 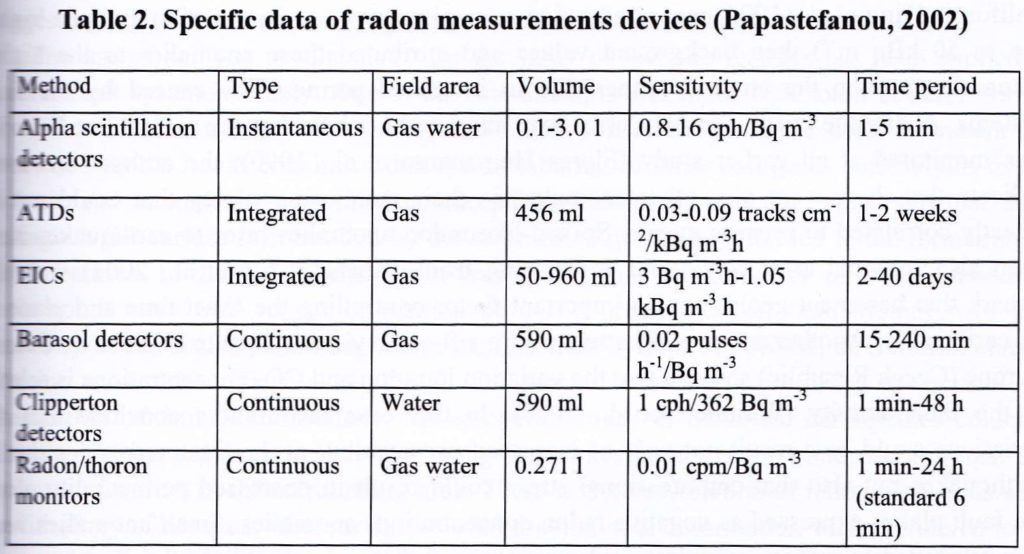 An important component of indoor air quality testing is measurement of abnormal levels of carbon monoxide.

Carbon monoxide (CO) is a result from all forms of combustible sources, from smoking and wood fires to propane and fuel-powered automobiles. Poisoning of a human subject comes in two forms – short term exposure to high levels which can cause severe illness or death, or longer term exposures at lower levels which may cause chronic symptomatology.

While actual death is relatively rare, there are far more cases that occur with sub-lethal exposures over a broad range of concentrations. (30 – 100 ppm by volume or ppmv) At the lower end (40 – 60 ppmv) headache and low levels of fatigue, and at higher levels (75 – 200 ppmv) nausea, vomiting and especially sleepiness.

Carbon monoxide and oxygen both bond to hemoglobin in the blood and will compete with each other over binding sites, but CO has the advantage as it binding sites have an affinity or preference of binding with CO that is 200 times greater than O2. (atmospheric oxygen) The result is decreased oxygen carrying capacity in the blood with the consequent neurological symptoms of oxygen deprivation as listed above as well as reduced oxygen to other body tissues. It also binds to intracellular proteins such as tryptophan oxidase, cytochrome oxidase,  myoglobin, and dopamine hydroxylase which may cause extra-vascular effects.

The result of CO combining with hemoglobin is to form carboxyhemoglobin. (COHb) Exposure to CO can be evaluated by measurement of the levels of COHb in the blood which is typically less than 1% for unexposed individuals. This is the % amount of blood hemoglobin bound with carbon monoxide. Cigarette smokers typically have a level of 3% – 8%. OSHA has a permissible exposure limit (PEL) of 50 ppmv over an 8 hour time-weighted average (TWA) in which case an individual would have a COHb level of approximately 5%. At 100 ppmv, it would be over 10%.

Even low level carbon monoxide exposures can cause issues in compromised human subjects such as those with cardiovascular disease. The lowest level at which COHb can show as a physiological symptom is 3 %- 4 % COHb. At 6 % COHb, arrhythmia may be induced in exercising patients with coronary artery disease with a risk of sudden death. There is also evidence that suggests that carbon monoxide exposure may contribute to atherosclerosis.

Studies have shown that those with flu-like or neurological symptoms had COHb levels of 10% or greater. (24% and 3 % respectively. Sub-acute carbon monoxide poisoning commonly goes unrecognized and is not diagnosed because it mimics other conditions and is present at the residence / workplace – not the doctor’s office.

Those at higher risk include pregnant women, young children, the elderly, individuals with conditions that already compromise O2 availability, and those that use certain medications and drugs.

For a discussion of CARBON DIOXIDE poisoning which is an entirely different phenomena, see the post here:

If you live in the Dallas / Fort Worth, Houston or Austin metropolitan areas and suspect carbon monoxide / dioxide poisoning or other indoor air quality issues, then contact ScanTech Technical Consulting for an evaluation.